Illustration of the Life Cycle of the Marsh Fritillary Butterfly.

All butterflies and moths (all belong to the order lepidoptera) have a four stage life cycle. The stages are: egg, larva or caterpillar, pupa or chrysalis and finally the adult butterfly or moth. Most Irish butterflies take a full year to complete their life cycle while others can fit two or more broods or generations during a full year. The larvae of some species live alone while other species larvae live in groups. Here is the illustrated life cycle of one of our rarer butterflies, the Marsh Fritillary.

The Marsh Fritillarybutterfly takes a year to complete its life cycle. Eggs can be found May-July, larvae July-May, pupae April-June and adults May-July.

We show all six instars of the Marsh Fritillary larva. While dates are provided for each photograph, in warm, sunny springs larval development is faster and the final instar is reached earlier.  This may result in the adult flying earlier in May. Faster development also occurs on warmer sites. 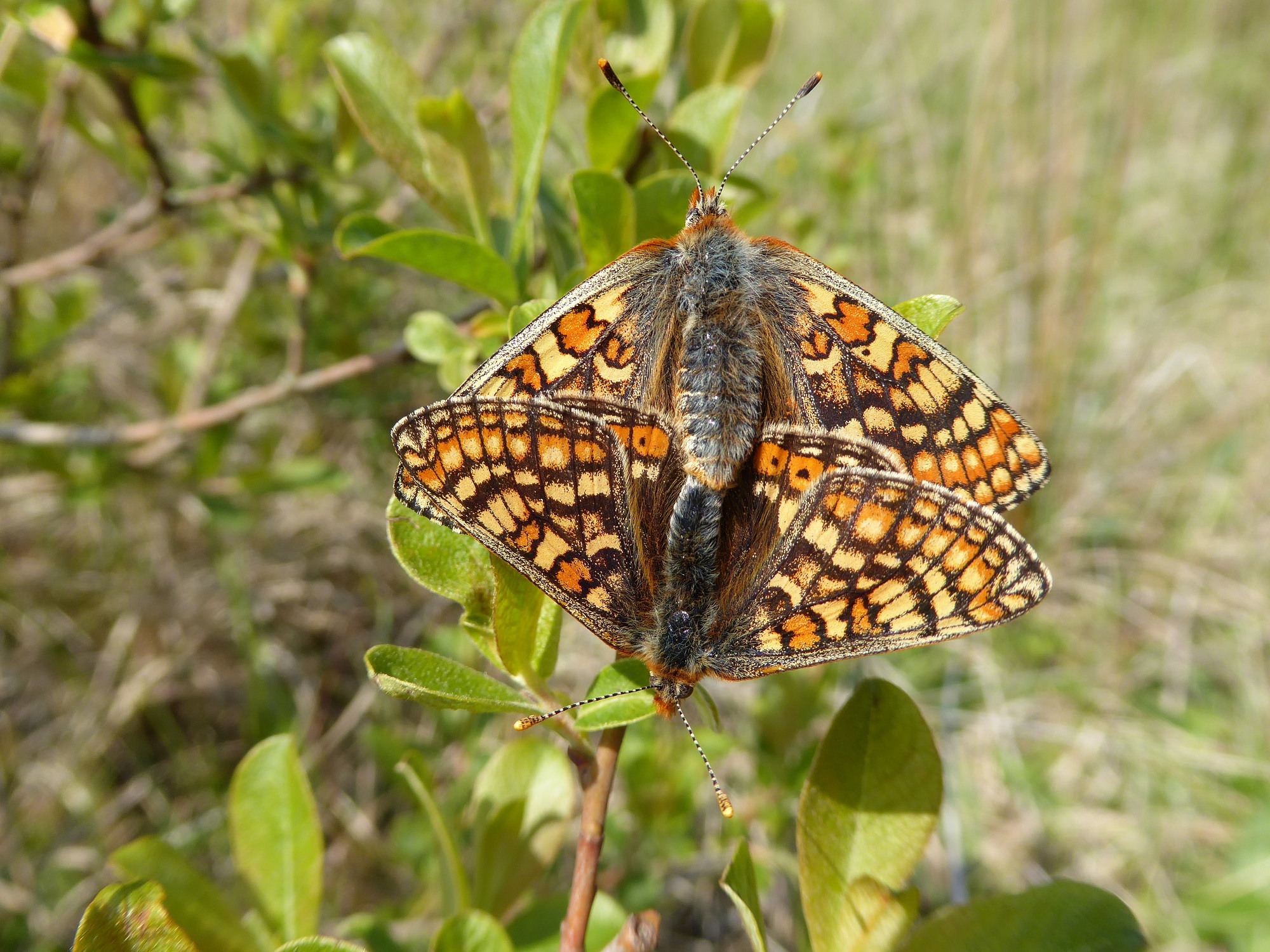 The Marsh Fritillary butterfly mates soon after hatching from the pupa. The female (top) often mates within an hour of emergence. She will lay eggs soon after mating as the eggs are already developed and only need to be fertilised. This photograph shows the female’s large abdomen, swollen with eggs. This photograph was taken on 28 May 2016.  ©J.Harding. 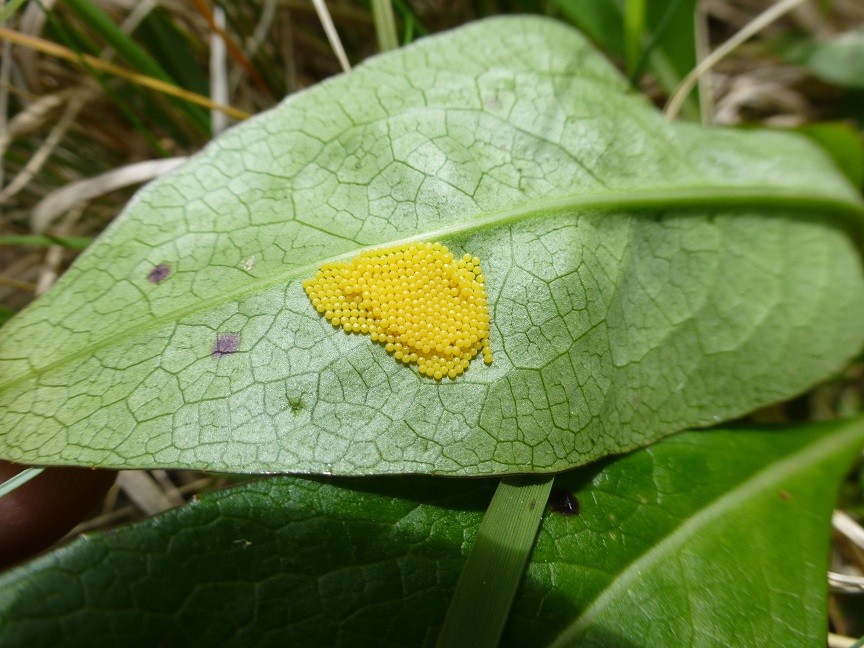 Marsh Fritillary eggs are laid in May/June on the underside of a leaf of the caterpillar’s food plant, the Devil’s-bit Scabious. Eggs are laid in large batches. This clump contains around 300 eggs. The eggs can take about 30 days or longer to hatch, depending on the nature of the site and weather conditions. This photograph was taken on 19 June 2013.©J.Harding. 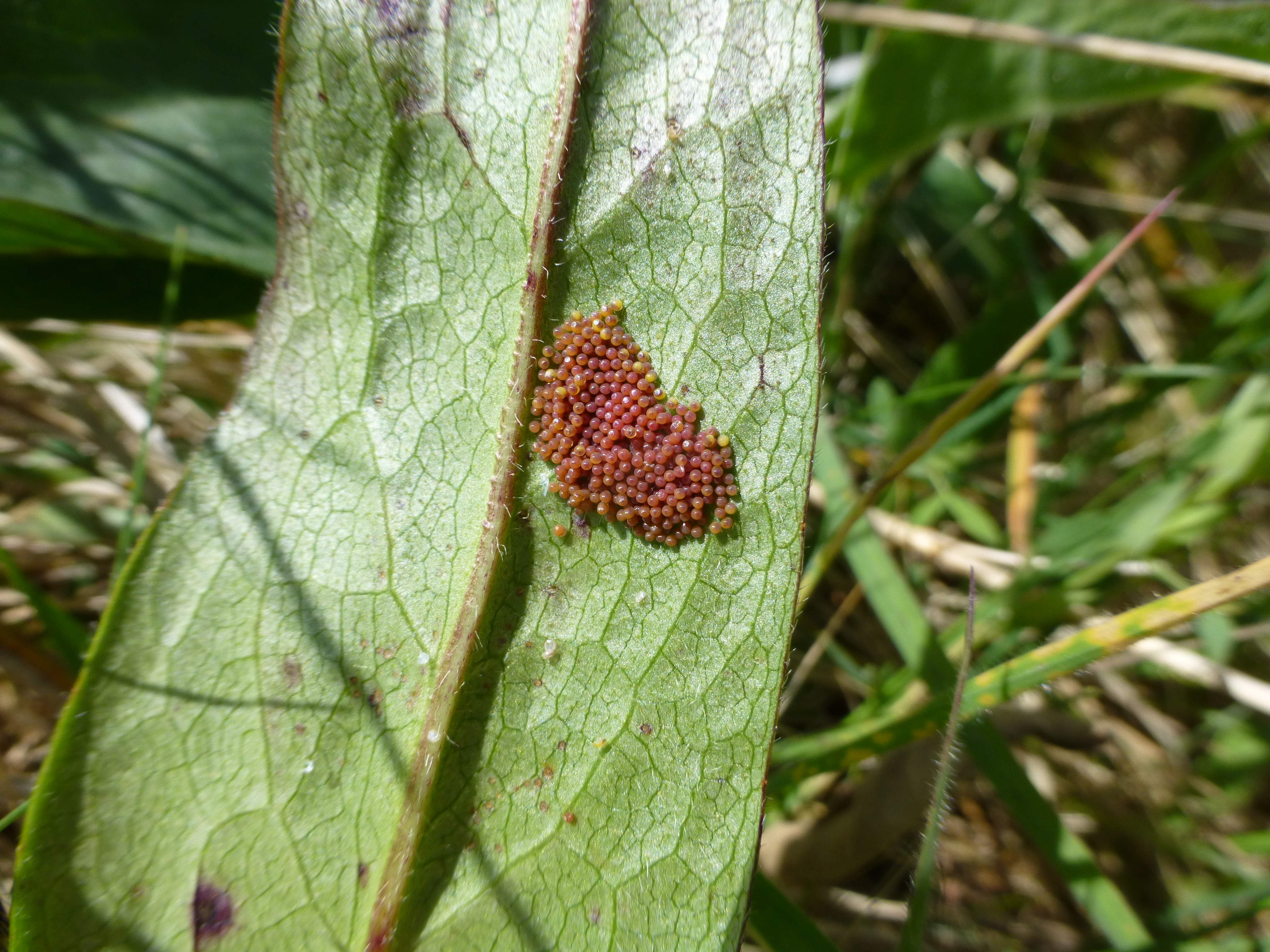 Eggs are yellow when first laid, but darken to purple-brown after about 12 days. Shortly before hatching eggs turn leaden grey in colour. This photo was also taken on 19 June 2013 and shows eggs laid earlier than those in the previous photograph. ©J.Harding 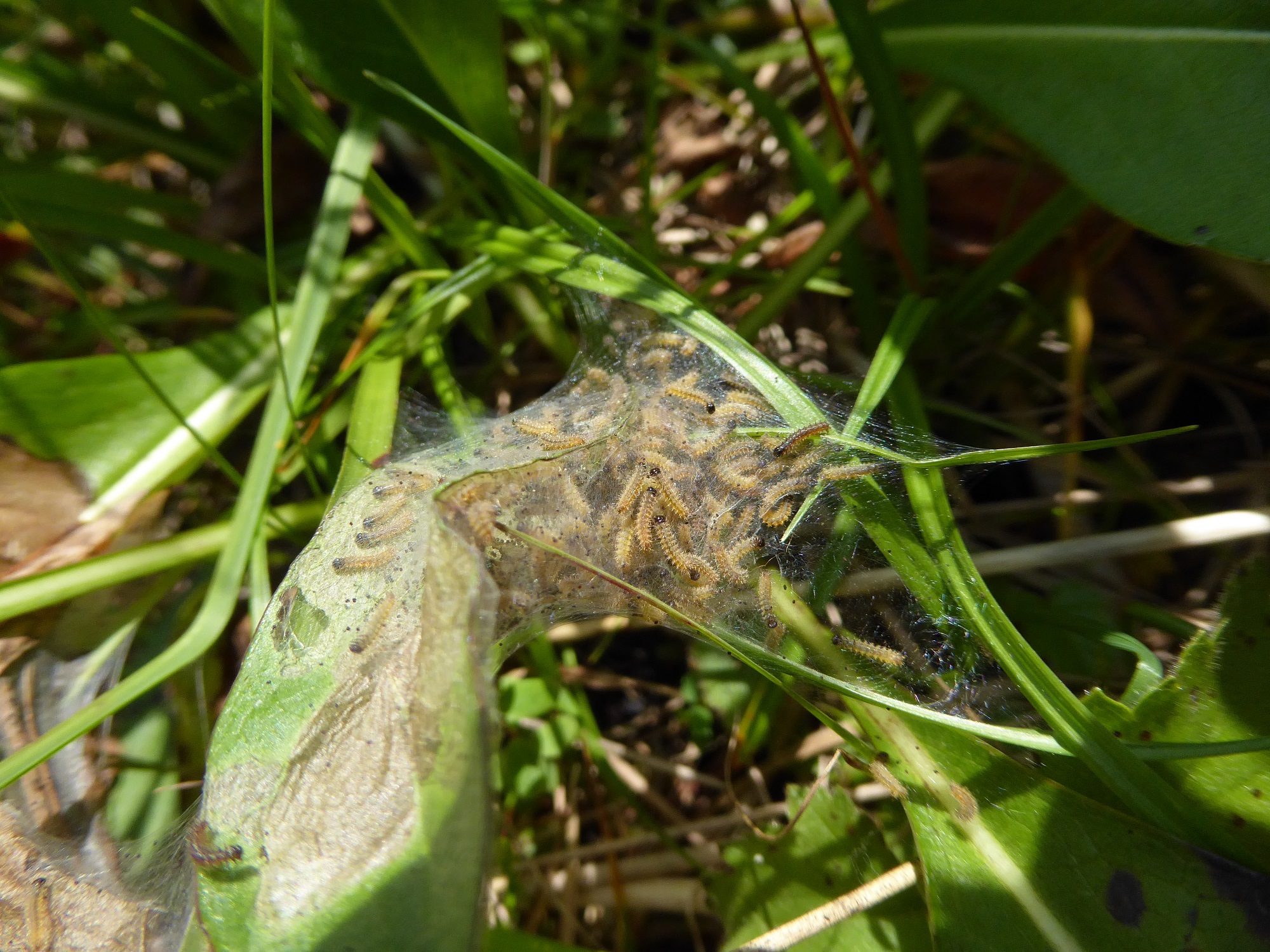 First instar larvae soon after hatching in late July. These beige-coloured  larvae feed and live communally inside a protective web formed by the larvae drawing the leaves of the food plant together. This photograph was taken on 24 July 2017.©J.Harding. 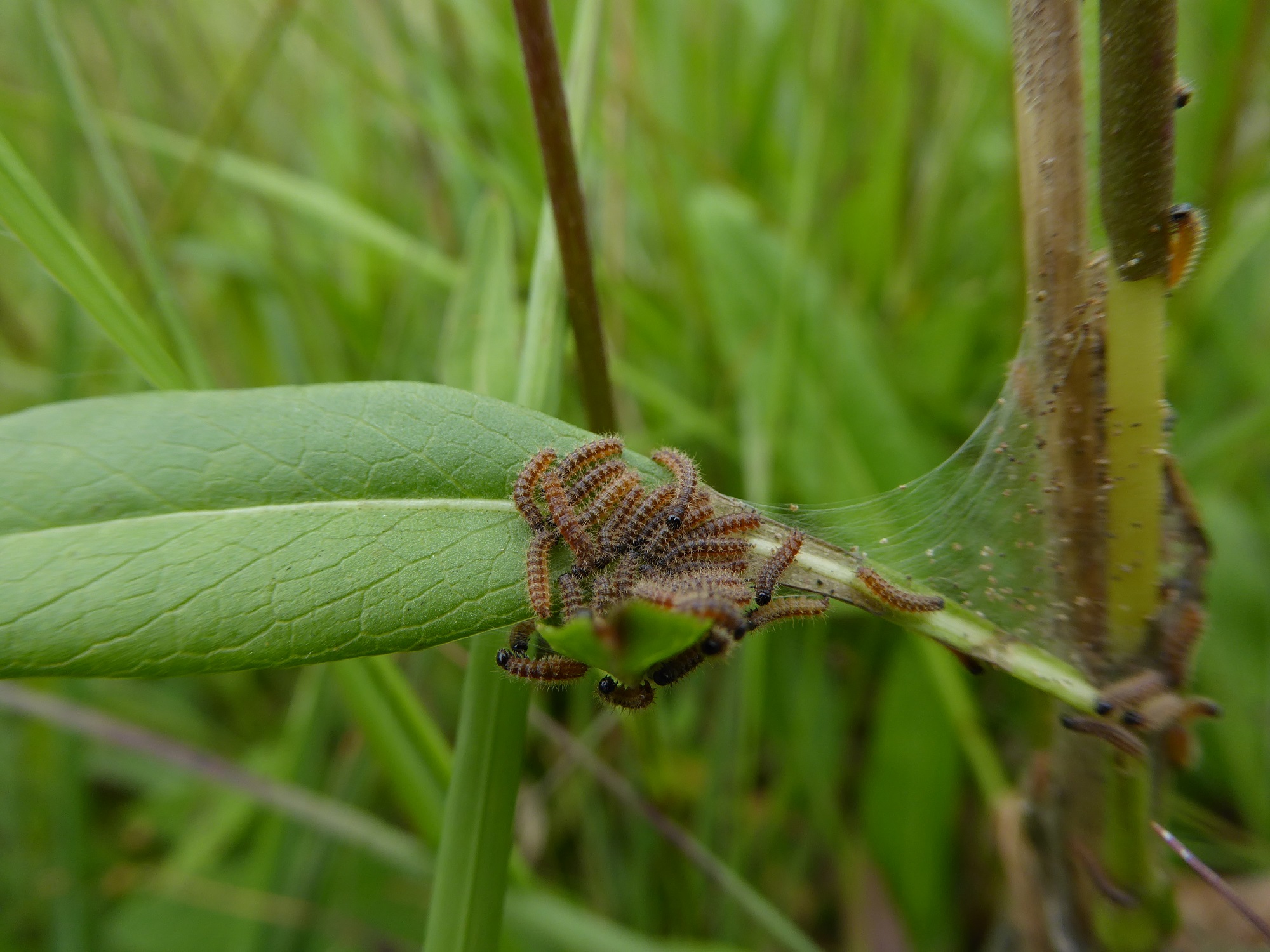 These second instar larvae are  spinning a new web around part of the food plant.  These larvae are a tan colour. This photograph was taken on 31 July 2017 .©J.Harding. 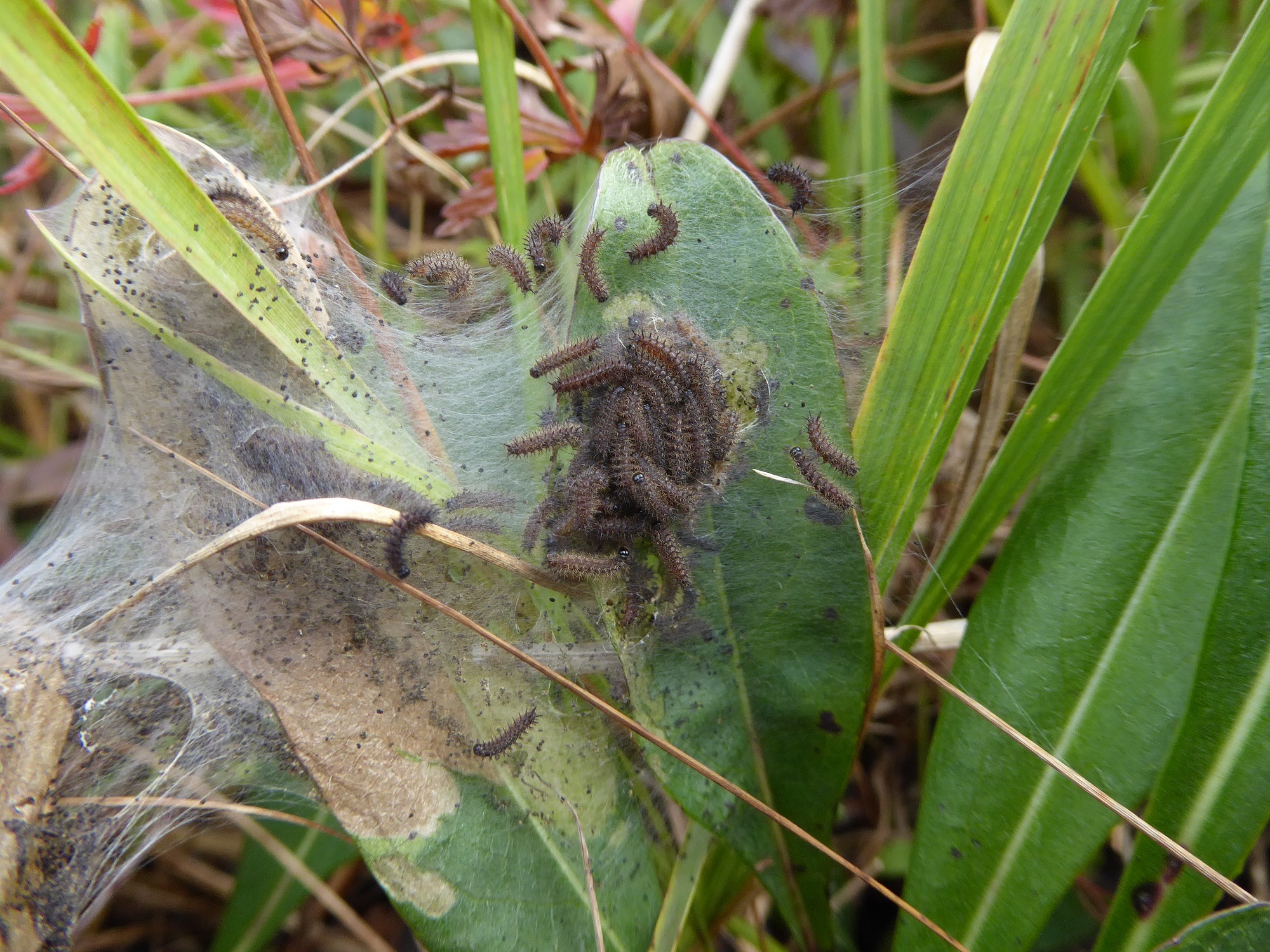 Third instar larvae from 22 September 2017. These  are darker than the  earlier stages. These larvae will soon spin a denser web usually concealed under the vegetation in which to pass the winter, protected against the harsh weather. Within this web, before winter arrives, they will moult for the third time to enter the fourth instar. ©J.Harding.. 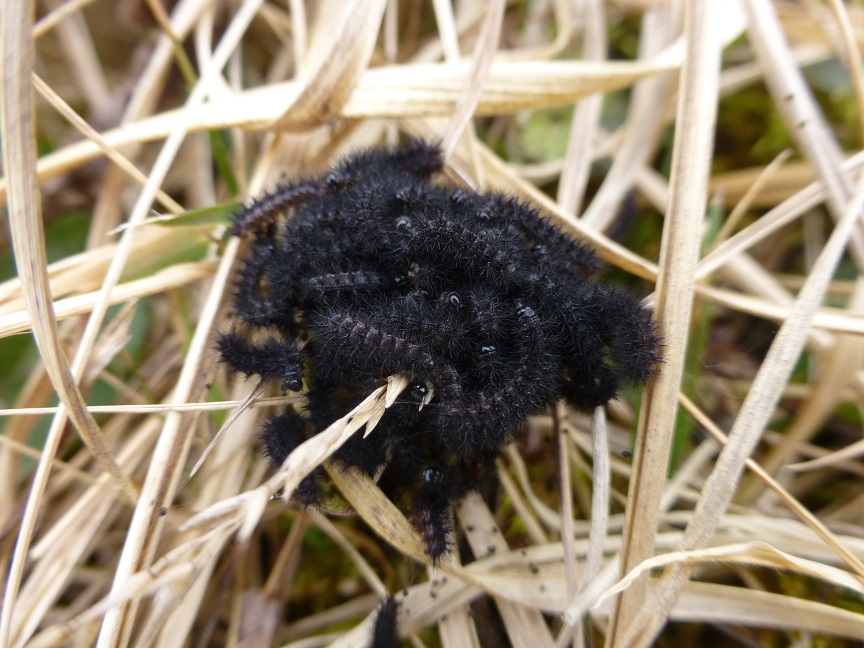 These are fourth  instar Marsh Fritillary larvae after hibernation .  They still form a web which is now used as a basking platform.  These are now black  with more prominent spikes, to deter birds. Their darker colouring  enables the larvae to heat up more efficiently in  bright  but cool weather  in February and March. The larvae are basking together to increase their body temperature to digest their food.  At night and during unsuitable weather the larvae retreat under vegetation. This photo was taken on 14 March 2015. ©J.Harding. 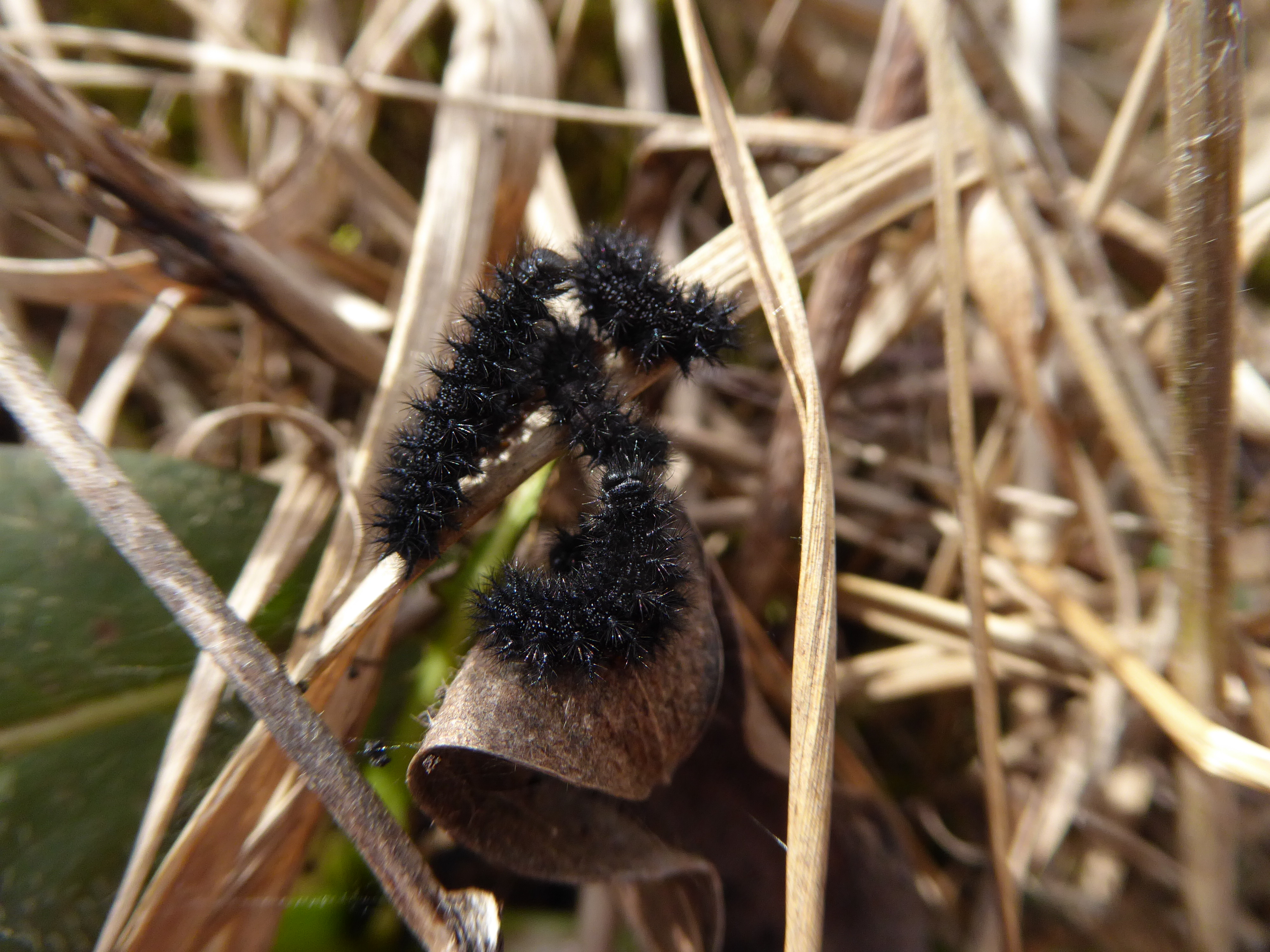 Fifth instar larvae are black with white speckling. The fifth instar larvae live exposed on the vegetation and do not form a web. These feed in smaller  and looser groups as the nest begins to break up. This photograph of recently moulted larvae was taken on 7 April 2018. ©J.Harding. 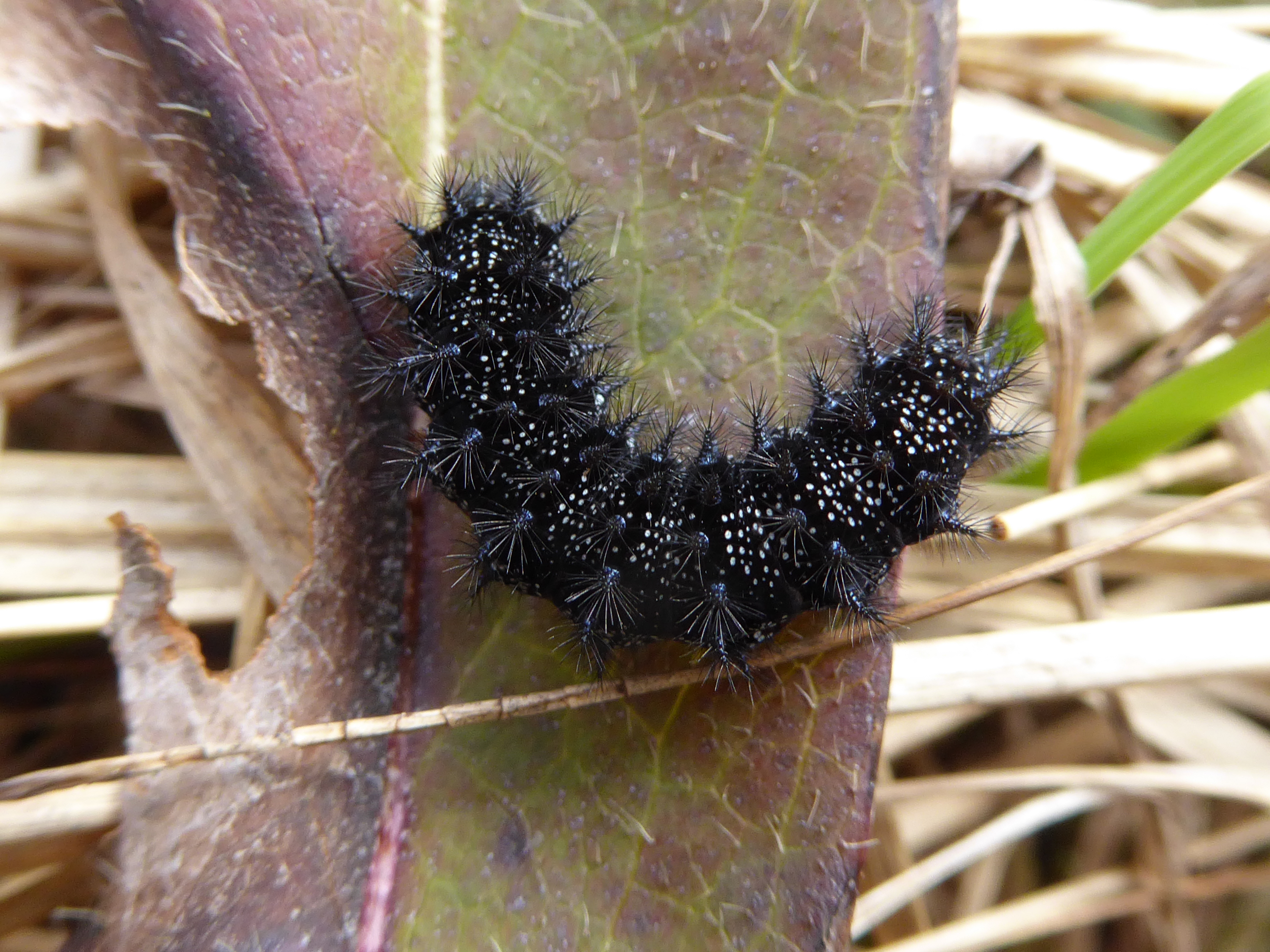 A sixth instar Marsh Fritillary larva. Mature larvae which show more prominent white speckling, feed independently. This one is fully grown and  will soon form a pupa [chrysalis] in which it will undergo metamorphosis [change its shape] to become an adult butterfly. It is ready to pupate in late April-mid-May. This was taken on  28 April 2018. ©J.Harding. 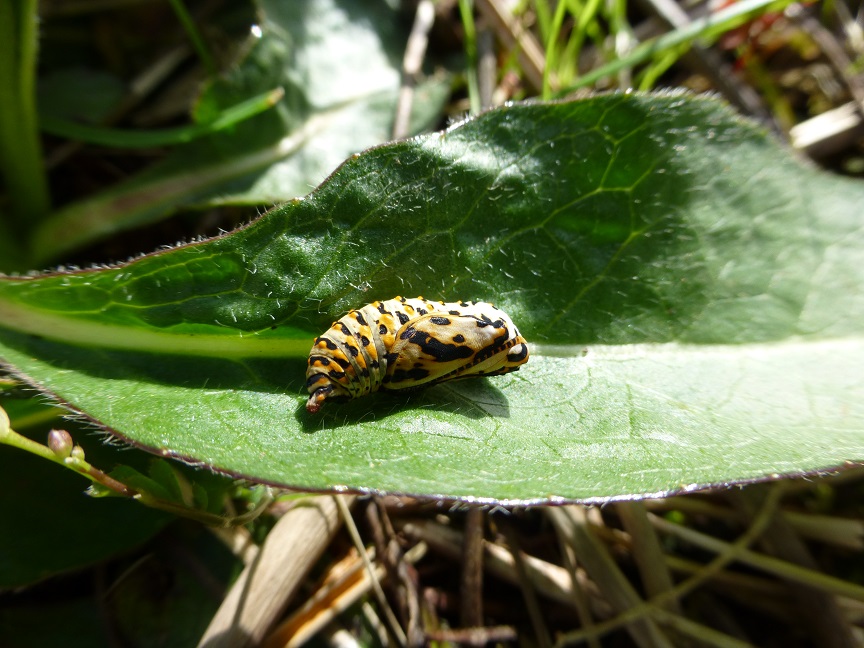 This is a Marsh Fritillary pupa. It is attached to a leaf by a silken pad spun by the larva. The pupa is usually better concealed than this one but is occasionally found on different colour surfaces. This is not untypical of species that are distasteful to birds.  This photograph was taken on 4 May 2013.©J.Harding. 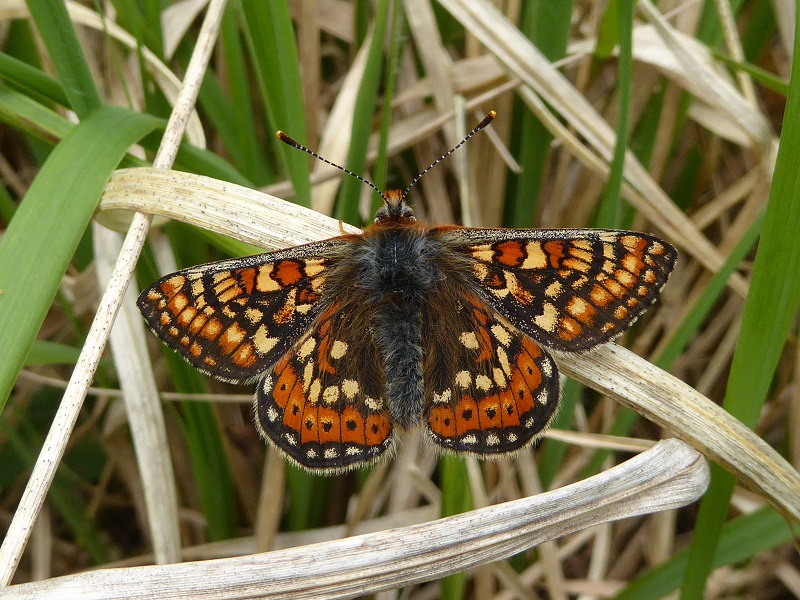 Here is a freshly emerged male Marsh Fritillary. The sexes look similar but the female is larger. The butterfly is ready to mate to start the life cycle process again. The female butterfly often mates and lays eggs on the day she emerges from her chrysalis. This photograph was taken on 28 May 2017. ©J.Harding.