In the early years of the twentieth century, Romanian diplomat Take Ionescu warned German Foreign Minister Alfred von Kiderlen Wächter that German armament building would produce disaster: “You are rushing directly into war with England”. In 1914, the UK declared war on Germany.

In March 1919, even before the Versailles Treaty was signed, British Prime Minister David Lloyd George wrote (in his Fontainebleau Memorandum) that creating small states containing German-speaking people on Germany’s borders would produce trouble.  Hitler later invoked the principle of national self-determination enunciated at Versailles to claim Austria and Czech and Polish territory on the grounds that ethnic Germans resided there.

On the night the Titanic sank in April 1912, Jack Philips, the Titanic’s radio operator signalled other ships to stop sending ice-berg warnings.   Philips replied to a warning from Cyril Evans, wireless operator on The Californian: “Shut up. Shut up. I am busy”.

On December 3rd 2018, some chilling warnings were given at the UN Framework Convention on Climate Change in Poland. One warning was provided by the World Meteorological Organisation. The 20 warmest years on record have been in the last 22 years and the warmest four years have been the last four years. It was also announced that Carbon Dioxide (heavily linked with the rise in global temperatures) emissions are rising again. But the most frightening warning came from Sir David Attenborough:

“The collapse of our civilisations and the extinction of much of the natural world is on the horizon”.

We are looking at a rapid deterioration of our planet. We are consuming far too much. If we continue to pollute and exploit as we do now we will have done so much damage that life on earth will become impossible or very difficult within 100-150 years.  If every family on the planet consumed as much as the average Irish family, we would need the resources of three and a half planets to support these consumption levels (Revd Professor Michael Mullaney, Maynooth University).

The mass destruction, the rampant greed for more than we can ever need is a violating life on earth. What can mend that?

Conservation repairs our relationship with the natural world. Conservation of our natural heritage resources is the responsibility of everyone, not just professional conservationists.  Conservation can involve very elementary steps. Every time you see a new butterfly that developed in your garden take flight, you are part of the solution. Garden for nature by planting native plants and allowing them to grow as they do in the wild. Read good literature about how to manage wild spaces. Do not use chemicals in your garden.  Garden organically. Join a conservation organisation and get involved in its work.

We can be conservationists in our consumer choices. Buy what you need. Avoid excessive consumption. Steer clear of palm oil.  Rainforests and their inhabitants, people, plants and animals are destroyed to grow this crop. Make your purchases a moral choice. Governments must act too and will if enough pressure is applied. On your holidays, visit areas rich in wildlife. This encourages the preservation of such areas.

Unless we change our behaviour, we will all pay the price in the end. And so will our world.

December 1st is officially the first day of winter. The day began misty and mild clearing to a drier grey which later dissolved into a light rain as heavier cloud darkened the afternoon before petered out into twilight disconcertingly early. At least our winter moths liked the conditions which were accommodatingly mild allowing furry, thick-set December Moths and lightly built Winter Moths to gather on walls close to outdoor lights. While these moths are thin fare for butterfly and moth lovers, we are at least reminded that we still have signs of life, little pick-me-ups for the rather bleak weeks and months to come. 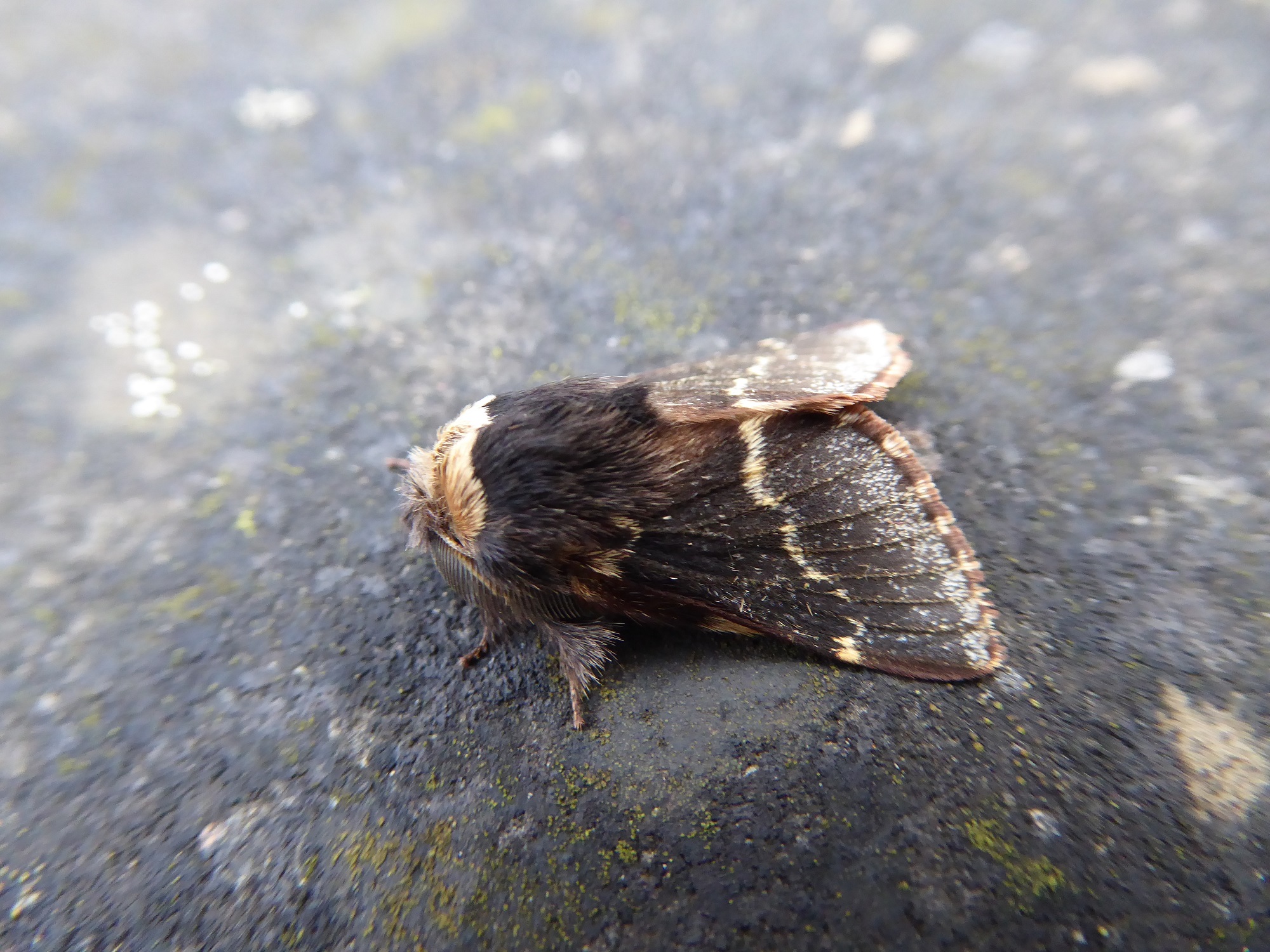 December Moth, which flies from November to January.

But this is not the time for lethargy. Winter is time for actions of a different kind. Now is the period for preparing sites for the coming season. Targets need to be met. These targets may include clearing dense bramble and thorn scrub invading a flowery track the runs through woodland, opening a glade in dense woodland to allow flowers to bloom or to reveal a gorgeous female Common Holly glowing green and red in dimming December light, removing non-native trees or shrubs which threaten to overwhelm native woodland or thinning dense growth to let light in to make the violet plants suitable for breeding by Silver-washed Fritillary butterflies.

Some of these actions are needed on the banks of the Royal Canal near Mullingar. Butterfly Conservation Ireland members along with the Westmeath Branch of BridWatch Ireland joined the effort to restore habitats with the Baltrasna Boreen Biodiversity Group, led by Lesley Whiteside. The high bank has a range of habitats, including native ash woodland, scrub consisting of willow, Common Holly, Guelder Rose, Common Hawthorn, Common Blackthorn and calcareous grassland containing Kidney Vetch, Common Bird’s-foot-trefoil and Autumn Gentian.

The steep site has four parallel paths, each quite different, offering different experiences; an encounter with badgers on one, Common Blues dancing around yellow blooms on another, water birds on a third and a brisk walk on the gravelled towpath on the fourth path. The site was grazed until the early 1990s but since it has developed woodland out of which paths and clearings are being carved to develop new habitats and increase biodiversity.

To this end, overhanging branches were tackled along with dense scrub and a sinister invasion by cotoneaster, a non-native which causes great damage by carpeting good limestone grassland. Extensive clearing of dense scrub was achieved. By allowing in light the flowers will be able to blossom and the bees and butterfly species will be able to avail of their nourishment. It was a demanding job but much ‘heavy lifting’ is now done, making it easier to deal with younger scrub. We are looking forward to our outing there next spring/summer to see how the flora and butterflies respond.

Finally, there must be many opportunities for biodiversity-conscious local groups to get involved in such projects. With permission from landowners, some planning and research much can be achieved, for people and nature. A special thanks to the Baltrasna Boreen Biodiversity Group for looking after their butterflies so well in this intriguing spot in Westmeath.