A new book on Ireland’s butterflies is available now.

A review of the book is available in The Irish Times.

Please note the correct contact email for the author:

The Irish Times review is here:

The often mysterious behaviour of Ireland’s butterflies is explored in this book.

Why do some female Speckled Woods flaunt themselves at males, while other female Speckled Woods behave so evasively? Can Brimstone butterflies forecast the weather? How do male Small Coppers react to persistent attacks from larger males? Why do Small Tortoiseshells enter hibernation in mid-summer in areas as far apart as Dublin and Donegal, months before they hibernate in other places nearby?

How does the male Green-veined White react when he faces a highly competitive mating environment? Do social caterpillars cannibalise? Why do male Brown Hairstreaks ignore females after 11 am? Why do we never see Painted Ladies leave Ireland during autumn?  Why do some male butterflies check caterpillar foodplants? Is the warming climate making life easier or harder for Ireland’s butterflies?

The culmination of over 25 years of study and thousands of records, THE IRISH BUTTERFLY BOOK  documents the full life cycle of every Irish butterfly from egg to adult butterfly and includes over 400 original colour photographs. There are one or more photos for each life stage of every species making this book the first of its kind.

Among the contents of this book are:

THE IRISH BUTTERFLY BOOK also has its own YouTube channel (linked to within the book) where you can enjoy film footage of Ireland’s butterflies.

Beautifully presented and designed, with a large font size and accessible text, this book is a great addition to the Irish wildlife bibliography.

“It’s a book full of knowledge, from Harding’s own painstaking observation and also new lepidopteral research. Most people are content just to have a name for a butterfly, but his essays on each species open up fresh worlds of interest, observation and mystery.” Michael Viney, Irish Times Review, January 2022. 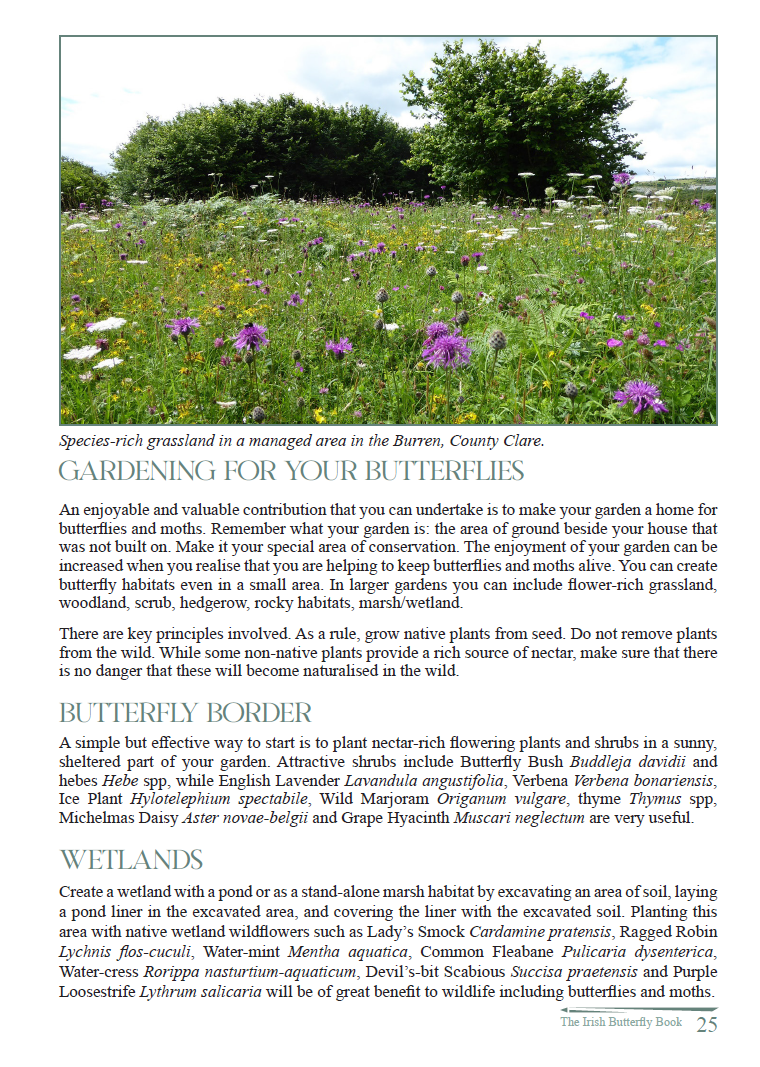 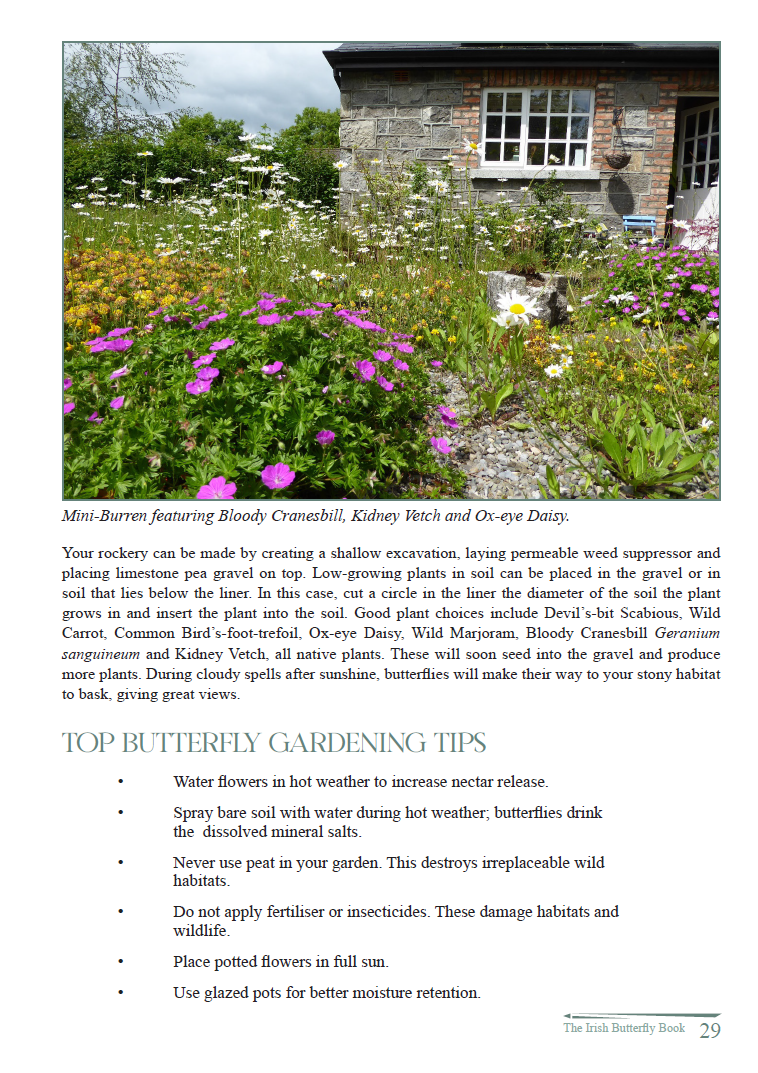 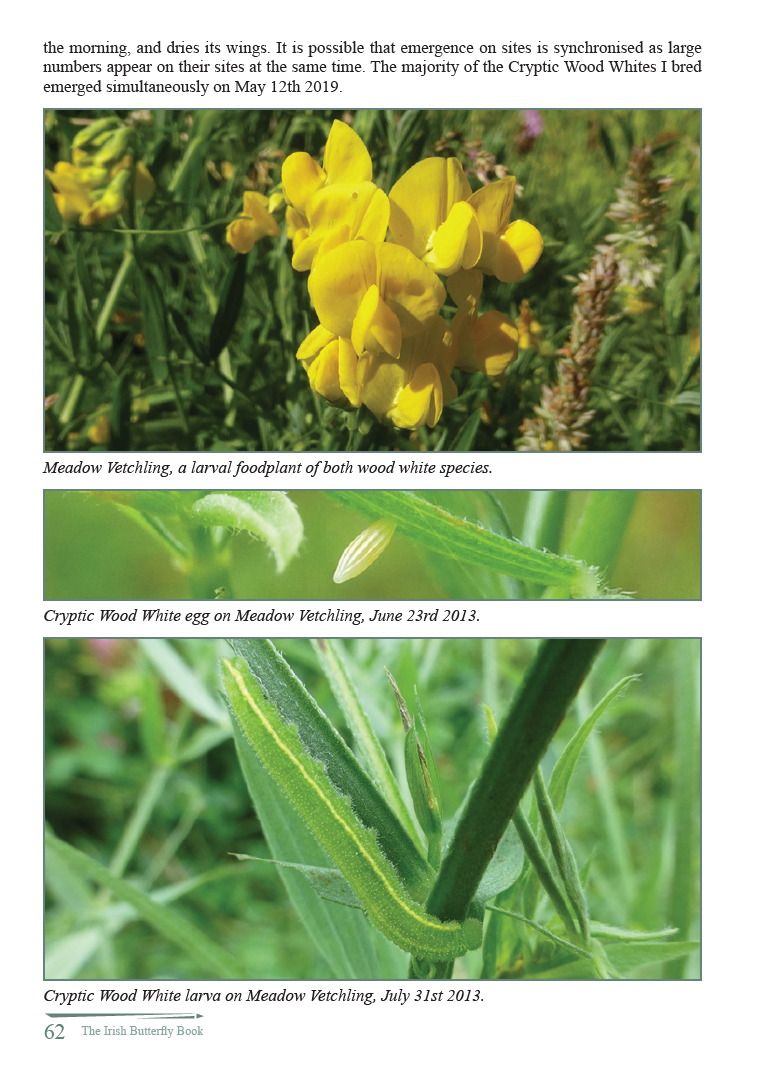 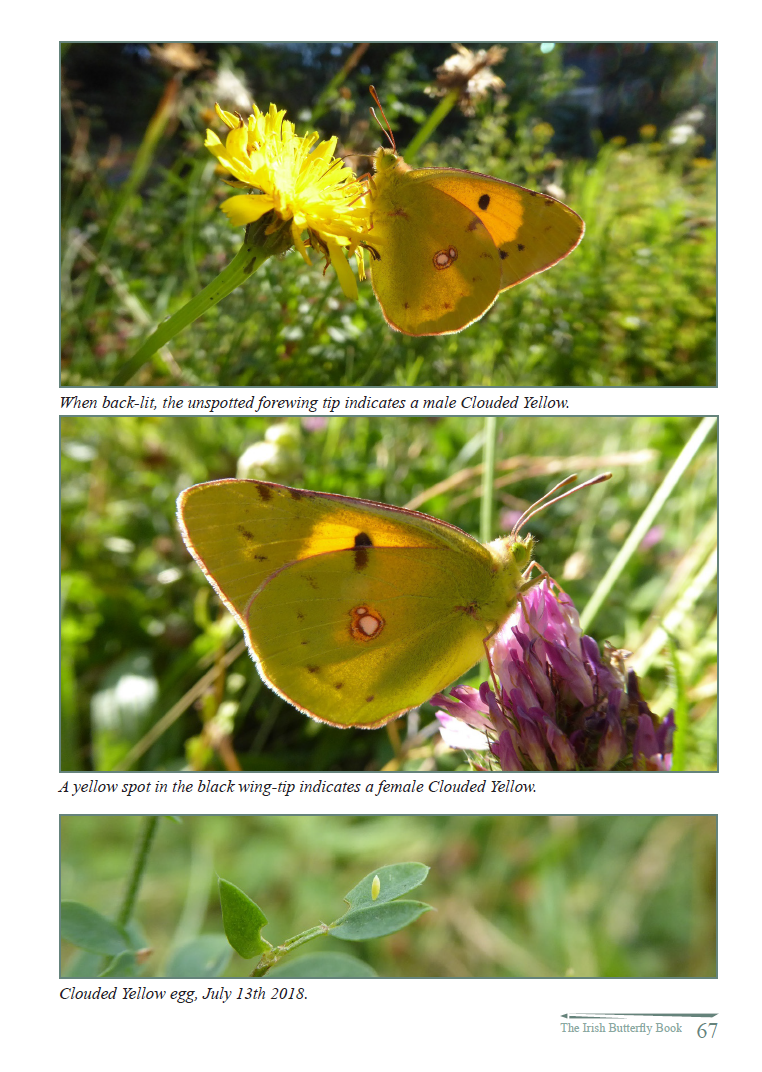 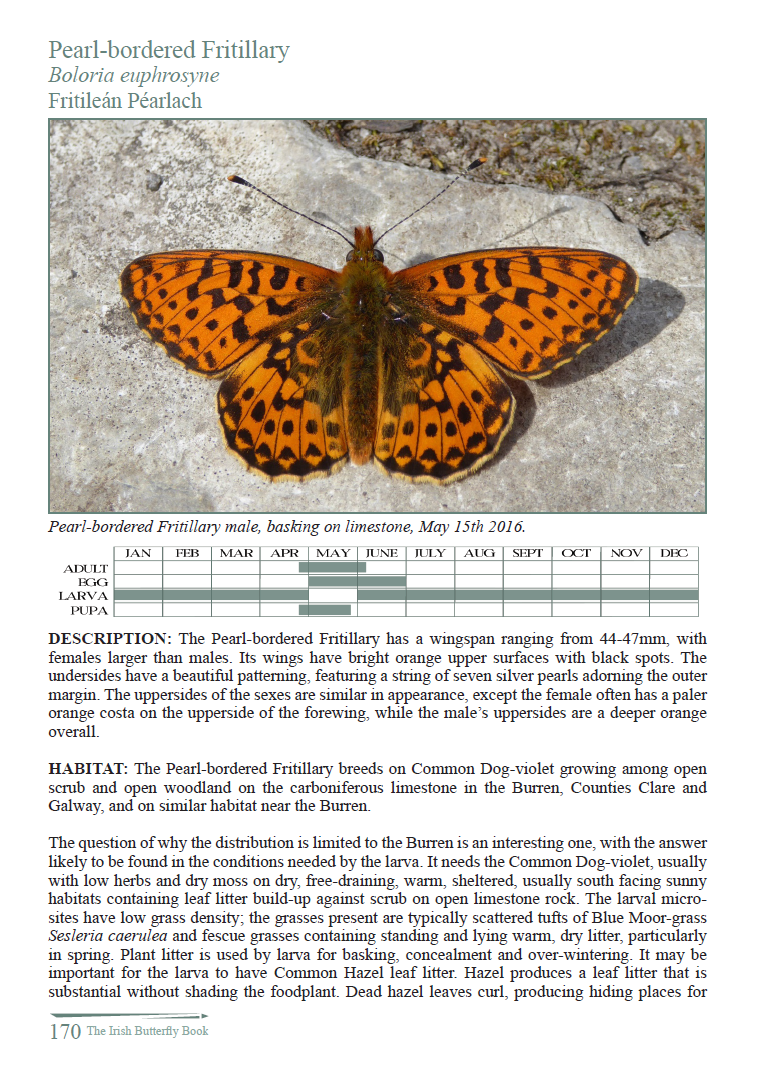 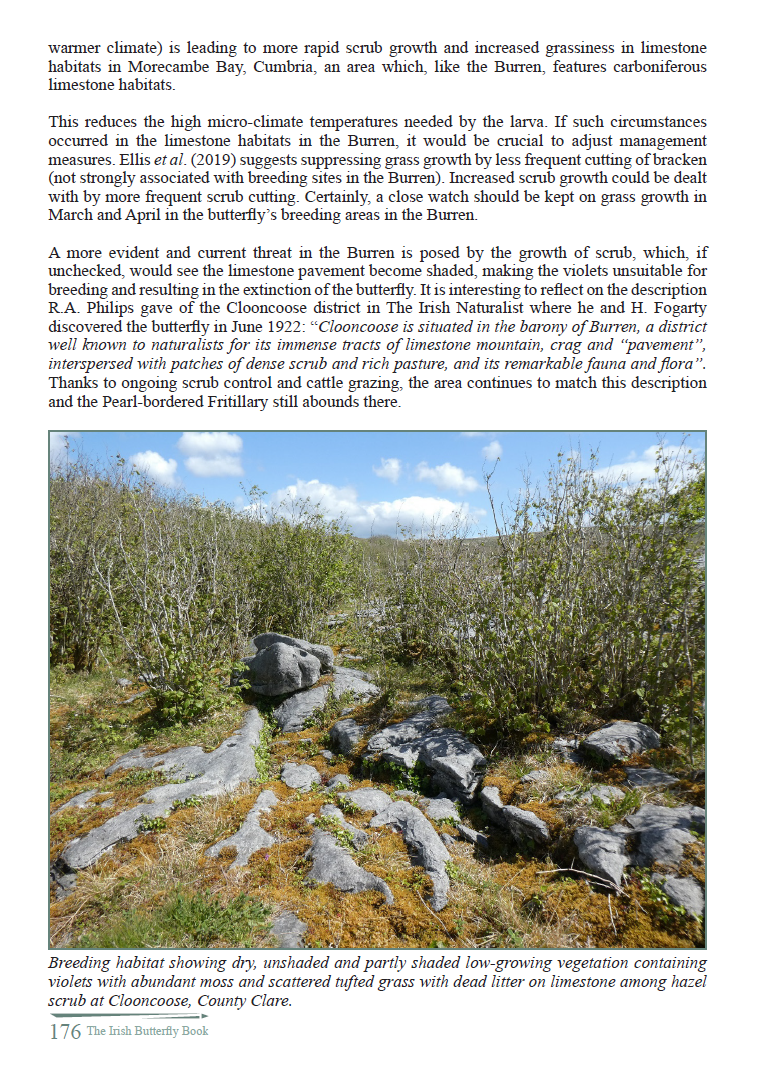 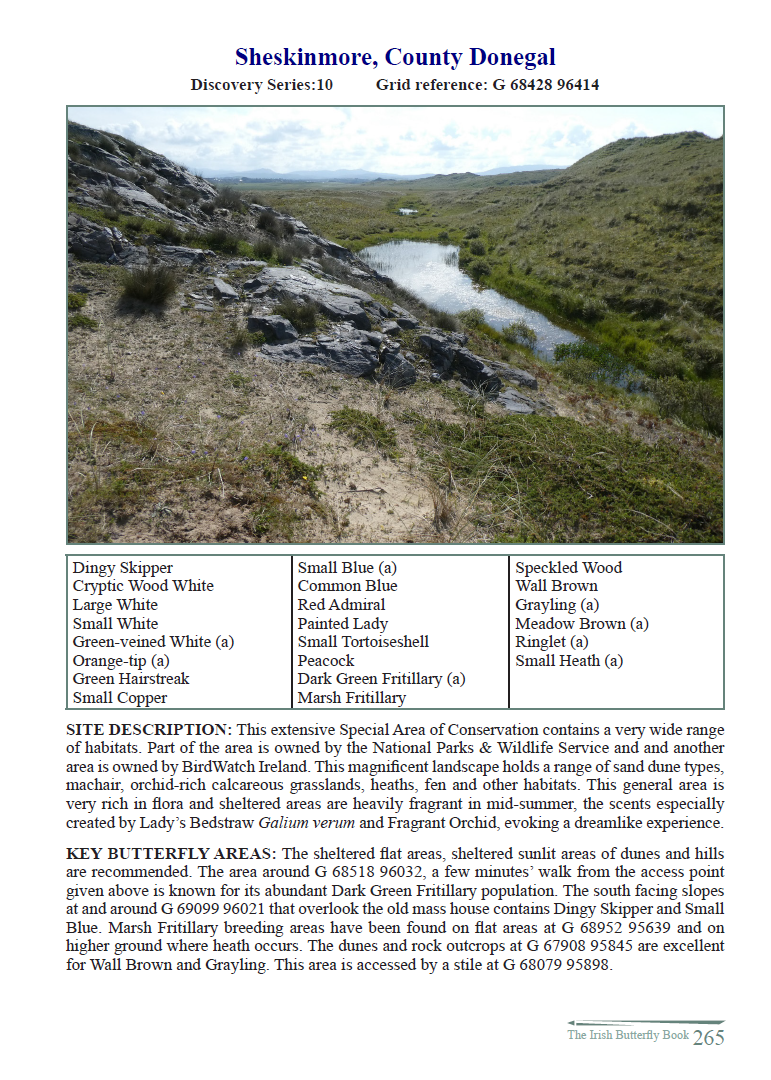 The Dáil (the lower house of the Irish parliament, directly elected by the electorate) declared a biodiversity and climate crisis in May 2019. At the time, Green Party leader Eamon Ryan welcomed the development, but warned that “declaring an emergency means absolutely nothing unless there is action to back it up. That means the Government having to do things they don’t want to do”.

The declaration of the crisis was initiated by Fianna Fáil and supported by the government.

She said Minister for Climate Action Richard Bruton would speedily return to the Dáil with new proposals, and she looked forward to working “with all parties and none” to scrutinise them.

Some important measures have been taken. It could be argued that the most significant is the decision by Bord na Móna to cease peat extraction in 2020, having scaled back peat extraction in 2019. This decision was followed by a government decision on November 24th, 2020 to fund peatland restoration on state-owned bogs in the Bord na Móna landholding. This involves re-wetting bogs to attempt habitat restoration and climate change combatting, with re-wetting creating conditions to capture CO2 and NO2.

The cynics among us may say this positive decision was in fact forced upon us. In 2019 the High Court made a decision that effectively ended large-scale peat extraction.  The Court held that a dual consenting system for large-scale peat extraction was required and that such sites could not be exempt under planning laws. For sites over 30 hectares, planning permission is needed including an environmental impact assessment. In addition, the development needs to be licensed by the Environmental Protection Agency and have an integrated pollution control licence.

There are other pressures that forced the Irish Government to end peat extraction, including pressure from the EU, the success of the Green Party in the last general election and the programme for government.

However, these measures have not ended the tragedy of peatland destruction. Central Statistics Office data obtained by Friends of the Irish Environment show that 1,419,624 tonnes of peat have been exported from the State between the beginning of 2020 and now, a multiple of what has been imported. Large-scale illegal peat extraction is taking place in plain sight throughout Ireland, which I have seen, photographed and reported to the National Parks and Wildlife Service and Bord na Móna. This activity is even taking place on Ireland’s special sites, designated as Special Areas of Conservation and National Heritage Areas.

Some politicians, in particular, Fine Gael Senator Regina Doherty and Fianna Fáil Senator Robbie Gallagher, want to exempt peat extraction from planning controls and have published The Horticultural Peat Bill 2021. (The Senate is the upper house in the parliamentary system in the Republic of Ireland, it is weaker than the Dáil and does not have veto powers ). This Bill proposes to overturn the 2019 High Court ruling to allow peat extraction up to 2030 at least.

Their pretext is that Ireland is importing peat from Latvia and Sri Lanka but the amount of peat we are exporting dwarfs the amount imported. Furthermore, we should not import or export peat if we are serious about addressing the biodiversity and climate crisis.

If appropriately restored and revitalised, our peatlands can more dynamically support Ireland’s climate and biodiversity ambitions while highlighting Ireland’s unique natural peatland habitats. As a first step, our view is that Bord na Móna should commit to rewet the landmass to arrest the further loss of greenhouse gasses from the exposed peatland and commence the process of carbon storage and sequestration. This will provide measurable results assisting Ireland’s interim targets of 7% year-on-year carbon reduction.

The “Smart Bogs” project under the EPA already gives us data on carbon flux and on which decisions on land use for carbon sequestration and storage can be made. The UN Climate Panel’s 6th Assessment Report published on 9 August 2021 confirms the value of peatlands for carbon storage, carbon sequestration and biodiversity. (The 6th Assessment Report https://www.ipcc.ch/report/ar6/wg1/ Ch 5. States, “Peatlands are less extensive than forests, croplands and grazing lands, yet per unit area, they hold high carbon stocks (Griscom et al., 2017).)

Furthermore, the government’s commitment to designate 30% of land for biodiversity can be substantially achieved by reprofiling our peatlands for nature. The EU’s Biodiversity Strategy for 2030 calls for the strict protection of carbon-rich ecosystems such as peatlands.

We also insist on strict enforcement of planning controls and an end to exports and imports of peat. We have no desire to see Latvia’s or Sri Lanka’s ecosystems destroyed to provide peat for mushroom growing and garden centres. In a recent assessment, it was estimated that, globally, natural peatlands are being destroyed at a rate of 4,000 km2/year (Parish et al., 2007). People have commonly treated peatlands as wastelands, using them in many destructive ways, without taking the long-term environmental and related socio-economic impacts into account.

The destruction of large areas of European peatlands in the past is repeating itself in the 21st century in developed countries: in Southeast Asia up to 70% of the tropical peat swamp forests have been significantly degraded and natural peatlands in southern and eastern Africa are under severe threat of conversion and degradation (CC-GAP, 2005). Since peatlands constitute habitats of unique flora and fauna which contribute significantly to the gene pool, the loss of peatlands in Ireland equates to loss of biodiversity at regional, national and international levels.

To conclude, consider this fact from the Environmental Protection Agency on the role of peatlands in the climate crisis context:

In light of future climate change, the most important function of peatlands in the 21st century is that of a carbon store and sink. Covering only about 3% of the Earth’s land area, they hold the equivalent of half of the carbon that is in the atmosphere as carbon dioxide (CO2) (Dise, 2009). It is estimated that the carbon stored in peatlands represents some 25% of the world soil carbon pool (i.e. 3–3.5 times the amount of carbon stored in the tropical rainforests (Parish et al., 2007)).

Do not buy peat for your fireplace, garden and do not buy plants or mushrooms grown in peat. Demand alternatives. Let our politicians know that you want a future that includes a biodiverse world and a stable climate. Speak up, they’ll have to listen.