August is well established and although the peak period (June/July) for species numbers has passed there is still a great variety of butterflies and moths to see.  Yet there are  hints of seasonal change; change is not full-blown yet, but there are  indications such as changes in the moth species turning up in the light trap that summer is waning.

Between Wednesday 9th and Thursday 10th of August I saw 21 species of adult butterfly, underlining  August’s  importance for butterflies. The high numbers and high activity levels demand large nectar and larval food plant resources. Many species are gorging on Common Knapweed. Bramble is a close second. Towards the end of August the important and beautiful Devil’s-bit Scabious becomes available on a large scale, providing nourishment for breeding and sustaining activity levels as well as helping to provide migrants and over-wintering species with fat reserves.

The fact that some butterflies are feeding in preparation for migration and over-wintering makes for excellent views. Peacock and Brown Hairstreak (a generally pacific butterfly that breeds in August/September) are so engrossed on taking nectar that they allow a gentle viewer to obtain superb views. On Wednesday I watched  female Brown Hairstreaks in County Clare feeding and basking on bramble.  By approaching carefully, I was able to get close to see her starched white ‘socks’, tan-tipped antennae clubs, zebra-crossing markings on the antennae and her pale fawn proboscis. The butterfly makes gradual changes to the angle of its body especially while feeding. It can be seen face-on and wafer-thin and slowly turning to reveal its autumn leaf hued undersides when perched with its undersides parallel to the observer.   Position changes enable the butterfly to probe different parts of the flower and regulate its temperature by heating or reflecting heat.  If there is a cloudy interval followed by weak sunlight, the butterfly will engage in dorsal basking (wings held at a plane horizontal to the body in full dorsal basking, open at a shallow angle in partial dorsal basking). When the butterfly basks in this way, a clear identification of sex is made. Females have large golden patches on their dark brown fore-wings, these are absent in males.

The sexes look so dissimilar on their upper surfaces that James Petiver, an early author and the father of British entomology was unsure if these were a single species; he named the male the “the brown double Streak” and the female “the golden brown double Streak” (Petiver abbreviated hairstreak). Petiver drew a female specimen taken in Croydon, Surrey on August 31st 1702. The Brown Hairstreak is still found in Surrey but it has declined  in the southern half of England and in Ireland it has been lost from Counties Waterford, Wexford, Cork and Kerry. Thankfully it survives in the Burren in Counties Clare and Galway where it appears to be doing well on unkempt hedges and scrub that are bathed in sunshine. The Brown Hairstreak is just one reason to seek butterflies in August. There are 25 additional reasons!

And that’s just the butterflies. 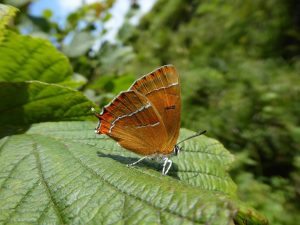 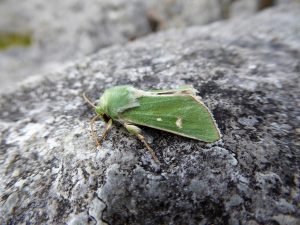