The Italian region of Tuscany is known for its high culture, history and landscapes. The birthplace of the Renaissance, Tuscany boasts great artistic masterpieces such as Florence Cathedral, perhaps most renowned for Filippo Brunelleschi’s dome, its bronze baptistry doors and frescoes, Michelangelo’s statue of the biblical David (Florence) that slew Goliath (France), Botticelli’s painting The Birth of Venus, the Adoration of the Magi by Leonardo da Vinci. Piazza dei Miracoli in Pisa with its magnificent cathedral and tower are more icons of the great age of art while the gentle rolling hills with vineyards, olive groves and hilltop woods, towering Apennine mountains and plains are pleasing to the eye. The cuisine is another feature of interest, being simple yet satisfying. Legumes, bread, cheese, vegetables, mushrooms, and fresh fruit are used. Wild Boar is a staple on menus.

Life seems easy there, and little wonder why. There are four seasons, and while the summer months are hot, autumn and spring temperatures are mild-warm. It rains, sometimes heavily, but summer is generally dry. November is the wettest month, but rainy periods occur in spring. Overall, the temperatures outside the summer months are not extreme, making for a pleasant experience.

I visited the university town, Siena, twice, in September 2021 and April 2022, with similar maximum daytime temperatures in these months. A walled redbrick Medieval city, in the south of Tuscany, Siena is known for its enormous square, the Piazzo del Campo, with its showpiece town hall, The Palazzo Pubblico, much of it built between 1297 and 1310, and its steep narrow streets, for this city is constructed on three hills. The city is without the despoilation wrought by cheap contemporary architecture. Despite the dominance of clay brick and travertine stone, the city contains relieving green spaces and is compact, not sprawling, with greenery beyond the walls easily reached on foot.

On arrival on April 12th, I began to search for the best habitats, hoping to see butterflies new to me. As April is quite early for butterflies and I was not looking in habitats of special character, I felt my chances of seeing rarities and species I had yet to see were limited.

Tuesday 12th was blue-skied and warm, so I checked a steep grassy embankment overlooking the heavily wooded valley in Siena that I searched last September. Back then, Wall Browns Lasiommata megera, Meadow Browns Maniola jurtina and Small Heaths Coenonympha pamphilus were present, and two of these were there in April-the odd one out being Meadow Brown, a single-brooded butterfly not yet in flight.

A closer look at the Brimstone and Small Copper confirmed the differences between the Irish race and their Italian conspecifics; the Irish Brimstone has larger underside blotches while the male is paler than his Italian cousin. The Irish Small Copper has grey, not beige underside colouring, and a redder hindwing band. Their Speckled Woods are strikingly different to ours: we have the subspecies tircis, with cream dappling on chocolate brown wings replaced with orange on aegeria, the colour form found in Siena and most of Europe.

Exiting the town via Porta Tufi or Tufi Gate, I quickly found patches of uncultivated land containing light woodland, scrub, hedges and open grassland, some of it containing colonies of the Green-winged Orchid Orchis morio, a rare plant in Ireland. Just a ten-minute walk from Siena, it felt like a world away. In addition to the butterflies already seen, I happily discovered more. In a grassy field dominated by buttercups, I found Green Hairstreak Callophry rubi, Sooty Copper Lycaena tityrus, Green-underside Glaucopsyche alexis, and Scarce Swallowtail Iphiclides podalirius.

A reminder of home, the Green Hairstreak was found in a habitat I have never seen it use in Ireland. It was flying in a grassy field, which was quite well vegetated but with fairly dry soil. In Ireland, it is strongly associated with wet places, especially bogs and wet heath. Unlike most Irish specimens, the example I saw had almost no white markings on its undersides.

The same small grassy field yielded two more gems; a Sooty Copper and a Green-underside Blue, neither of which I’d seen before. The Sooty Copper is around the same size as the Small Copper but rather darker on its uppersides. It behaves quite similarly too, and the one I saw was a female, and she posed often, making photographing her quite easy, although she perched with angled wings, like the Small Copper so a full image of outstretched wings is rarely possible.

The Green-underside Blue is one of the easiest continental blues to identify and as the photograph shows, it lives up to its vernacular name. A spring and early summer species, it is a delightful creature. I wish I managed a photograph of the uppersides, a deep blue in the male that is unforgettable.

Two lovely Scarce Swallowtails fluttered around high scrub before departing, not landing low for a photo! The spring generation usually feeds on tree blossom, as the nectar-rich grassland flora is not available to it in spring. But just to see these large, exotic butterflies fluttering delicately in the warming air brought pleasure!

An adjoining field with herb-rich vegetation added a female wood white (not identified at species level), Clouded Yellow Colias crocea, and Grizzled Skipper Pyrgus malvae (busy laying her eggs, singly, on the underneath of leaves of a potentilla species, possibly Creeping Cinquefoil Potentilla reptans). This was the first sighting of this dizzyingly difficult flyer for me. Its sharp chequered pattern adds to its dizzying flight pattern, making tracking it tricky. Later, I saw it in a park in the city, on similar grassy vegetation. This little spring butterfly, single-brooded or double brooded depending on locality and latitude, also occurs as a scarce butterfly in the south of England but it is not present in Ireland.

Nearby, another skipper, another first, the Mallow Skipper Carcharodus alceae. Larger, and much duller, this breeds on Mallow Malva sylvestris. Males have a strange habit of lowering their wings below their thorax and elevating their abdomens, in low light and low temperature. Captive males kept in darkness retain their bizarre-looking posture for hours.  The males I saw were not put in this situation and did not perch in any spot for long.

Further out in the field while observing a male Common Blue Polyommatus icarus I spotted a fidgety copper butterfly looking for a place to lay her eggs. I was delighted to see another species for the first time, the Lesser Fiery Copper Lycaena thersamon. The butterfly is absent from most of Europe, being found in Italy and the Balkans. It breeds on a fairly common plant, Common Knotweed Polygonum aviculare. While she would not sit still, I managed a half-decent photo, enough to identify her!

While chasing her up the steep slope a Clouded Yellow crossed my path, one of several I saw including some seen from the train window on route to Siena, along with the occasional Geranium Bronze Cacyreus marshalli, a curious little butterfly now established in southern Europe from South Africa. It is described as a “pest on Pelargonium cultivars” but it rarely if ever destroys these ornamental plants. The walk back to the city yielded a fleeting glimpse of a male Cleopatra Gonepteryx cleopatra, a Brimstone with a deep orange splash on the forewing upperside. Alas, he did not pause for a photo! 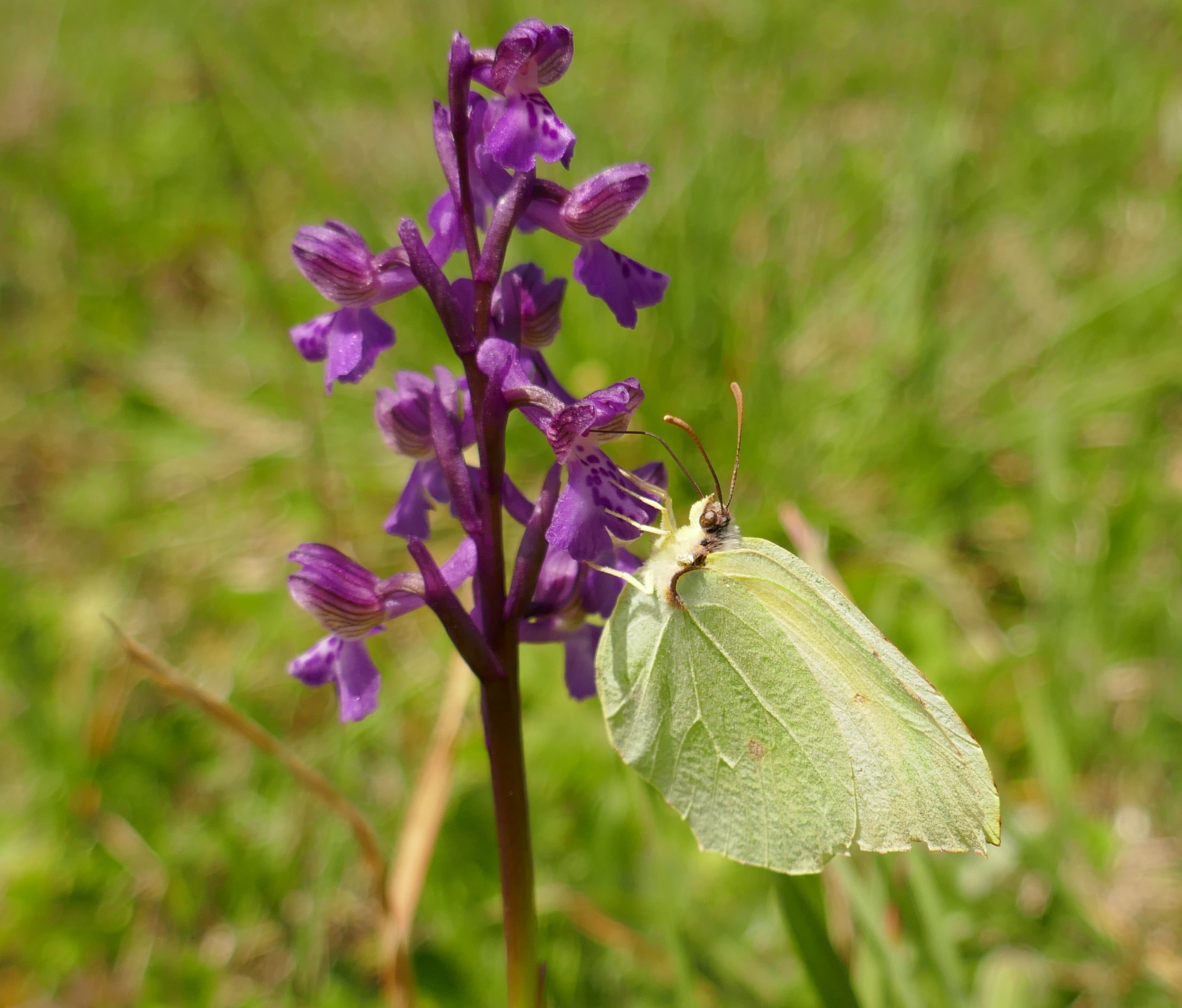 This April, I recorded 23 butterfly species in and around Siena. The area is not known for its biodiversity but to a person from Ireland or Britain, it offers plenty of excitement. Interestingly, the city is divided into contradas, or districts, each with a symbol. One contrade is named Bruco, the caterpillar. Its insignia is a rather aggressive green caterpillar on a rose. While the origin of the name is unclear, Bruco’s residents worked in the silk trade, offering a likely background to the title. The contrada is famous for leading a rebellion in 1371, to overthrow the Sienese council and establish a people’s government. This great change alludes, fancifully at least, to a caterpillar’s metamorphosis via the chrysalis, a symbol of change.

Hopefully, the presence of butterflies in and around Siena will continue, a feature that adds to the charm of the area for the travelling naturalist.